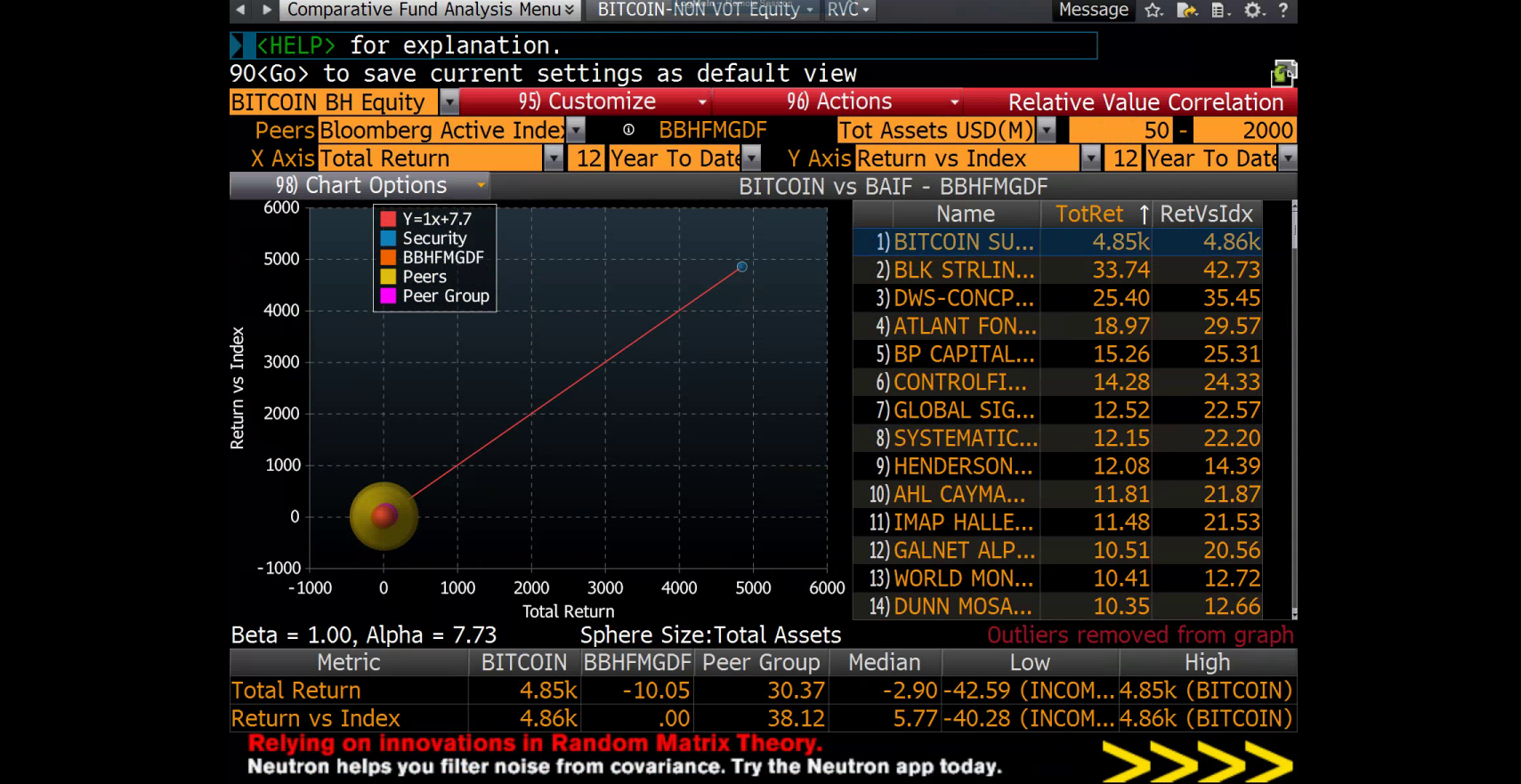 Although technically launched in late 2012, Malta-based brokerage Exante released their 2013 year-to-date (YTD) performance statistics for The Bitcoin Fund last week. Listed in Bloomberg’s Comparative Fund Analysis section, The Bitcoin Fund came in with a 4,847% return, leading its peer group by a wide margin.

The closest funds in the comparative analysis registered a year-to-date performance of 33.7% and 25.4% respectively. The Bitcoin Fund gives institutions and high-net worth individuals easy, secure and rapid access to the vibrant bitcoin market with a unique licensed product.

The company also offers a reliable secondary market for the trading of fund shares on both a long and short position basis. Recognising that speculative bitcoin trades exceeded transactions for goods and services by 20 to 25 times in the latest quarter, Exante co-founder Vladimir Maslyakov told Bloomberg that:

“The real economy is not growing as fast as the price, speculators are usually much faster.”

It is impossible to know with certainty the motives behind a trade (or if liquidity-enhancing speculation is even detrimental), but this new chart from Blockchain.info attempts to measure the ratio of trade volume to transaction volume, as explained by David Perry.

However, this imbalance is expected to adjust as Bitcoin has now surpassed PayPal and Discover to become the world’s fifth largest payment network by daily transaction volume, as measured by Coinometrics.

Lately, increasing demand for bitcoin has been driven by China which recently eclipsed the US in active bitcoin nodes on the network. This rapid price appreciation tends to put pressure on bitcoin-related startups because entrepreneurs must increasingly justify how a placement into their company will yield a higher rate of return than simply investing straight into the digital currency. Building out the ecosystem benefits everyone.

Arguably, bitcoin represents a binary investment: either ultimate success as a world reserve currency, or capitulation to a zero price point.

The key challenge for venture capitalists and startup investors will be to leverage any investment into a scalable infrastructure company for dual participation by maintaining asset balances denominated in bitcoin. It would be counter-productive to financially support a bitcoin ecosystem company without also supporting the underlying base currency.

Union Square Ventures’ Fred Wilson seems to miss this point when he declares that his primary interest in Bitcoin is its ability to become the “financial and transactional protocol” for the global Internet, and that he and his firm own very little bitcoin. Wilson makes this statement as if Bitcoin can achieve the lofty protocol role without any impact on the monetary value of the underlying base currency unit.

It is almost as if he believes that USV’s portfolio company Coinbase will be better off by converting bitcoin-operational proceeds into US dollars and keeping balance sheet assets in US dollars. Unfortunately, I suspect this is the case at Coinbase.