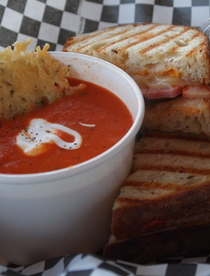 Food trucks have proliferated in the digital age. With social media and geolocation, potential customers can keep tabs on their favorite foods prepared in mobile kitchens. These trucks also allow entrepreneurs to try new food concepts and themes.

The Cheese Wizards are a great example of this, melding fantasy and science fiction with mobile grilled cheese sandwiches. So, given their geek-like bent it would make sense that the Saxbe brothers Bo and Tom would accept bitcoin as a method of payment.

“The actual transaction is fairly simple: customers waltz up to our truck, drawn in by our irresistible cheese magic, and let us know they would like to pay in bitcoin,” says Bo Saxbe.

And the bitcoin business has been good. Actually, it has been much better than the brothers had expected.

“We’ve had one or two bitcoin sales every hour since we started using
The Durin’s Bane sandwich with a cup of soup.

Selling Harry Potter themed sandwiches such as the Voldemorta-Della or the gamer-centric Tomato Basil Soup Power Up can draw a pretty tech-savvy crowd. And for Cheese Wizards, it’s become pretty obvious that their customers like to spend money via bitcoins.

The Saxbe brothers didn’t do a whole lot of marketing in preparation to start accepting BTC.

“At the moment, we just have a homemade ‘We accept bitcoin’ sign in the window, but we plan on something with a little more panache soon! It’s pretty fun seeing the surprised expressions of customers who find out through the sign,” says Bo Saxbe.

In fact, the brothers thought implementing bitcoin as a method of payment would be a more difficult undertaking.

“It took us a little longer than it should have because we were expecting the process to be a bit of a hassle, but once we started, it was simple.”

“Just as information has left the world of paper and cassette tape, money is increasingly an abstract entity.”

“We get lots of businesses interested in bitcoin not only for the investment potential, but the reduced risk of fraud. Bitcoin can’t be charged back like credit card transactions, so the chances of you making a sale and then not getting your money is virtually zero,” says Skweres.

And privacy is something that in a larger sense might be why consumers should consider using bitcoin, according to the Saxbe brothers.

“Just as information has left the world of paper and cassette tape, money is increasingly an abstract entity,” Bo Saxbe said.

“In this world where money has been reduced to electronic reshuffling between a million private accounts, do we want any entities that can follow every exchange? I think most people don’t like to envision a world where large financial companies or governments can track every purchase we make.”