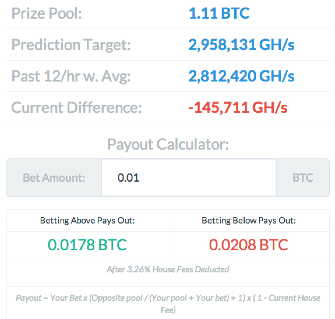 Volatility seems to be a key component of bitcoin. It’s still early days, but the unregulated nature of this decentralized currency contributes to its price volleying up and then down.

The same can be said about bitcoin hash rates, a measure of the currency’s overall network strength. This statistic also does its fair share of bouncing around, and although most people don’t notice it, it is rather capricious like pricing can be.

Bitcoin’s hash rate volatility is a risk to miners who are trying to profit from solving calculations in order to create new bitcoins and confirm transactions, which results in earning a small fee. But a new site called Futureblock offers a way to bet on future hash rate volatility.

It would seem as if betting on hash rates would be a very tiny fraction of the ever-growing BTC gambling market. Ardon Lukasiewicz, who is working on a project called Bitmarkers to allow gamblers to use bitcoin in real casinos, finds it hard to see how Futureblock could be attractive to the masses.

“The site looks nice. [But] the betting isn’t fast-paced enough for online gaming. I don’t like these ‘binary bet’ websites in general. This subject is far too niche and complex to attract any mainstream attention. Where is the excitement in hash predictions?”

Origins of the Futureblock idea

The concept of betting on where hash rates are going will not leave the average gambler salivating, but bitcoin gambling is becoming a large market for network transactions. Betting is actually not the point here, though, since Futureblock is more about bitcoin mining than anything else.

One of Futureblock’s founders, who wishes only to be referred to as ‘James’, said: “We’ve been watching bitcoin for a while. We bought a small ASIC miner to see what it’s like.”

After looking at the mining market, it was clear to the founders that something like Futureblock could prove to be useful. “Miners are all using the same spreadsheets when investing in mining equipment. If they are doing this, they have all gotten it wrong. It is not increases in hash rate that are wrong, it’s in predicting it.”

Various spreadsheets offer different calculations regarding the future of mining difficulty and hash rates. According to James, miners are following these predictions even though they are often incorrect, which makes it hard to actually make timely investments in mining, specifically in the hardware infrastructure.

James believes this is why Futureblock can be used as a tool for miners. The site offers something called parimutuel betting, which is sometimes also known as the tote.

Parimutuel betting pools all bets together, and odds are then calculated via all the winning bets that are in the pool. “Pooled betting means limited advantages in hedging,” said James.