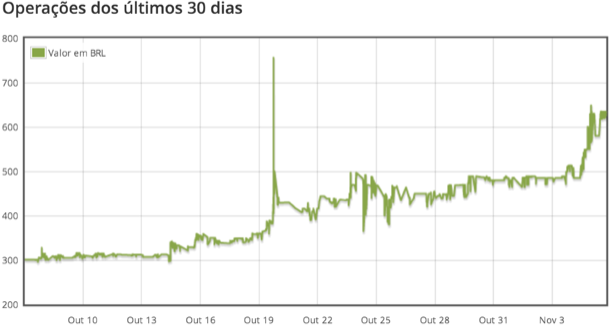 The popular Brazilian science and culture magazine Superinteressante has created a bitcoin paywall.

Not only is the publication accepting the digital currency, they’ve embraced it by publishing articles aimed to educate the population of Brazil on its benefits.

The magazine announced its acceptance of bitcoin in a recent post:

SUPERINTERESSANTE magazine is ahead of a whole new experience, and you’re invited to take part.
In the November issue, you’ll learn about a district in Berlin where bitcoins – a virtual currency – are replacing conventional money. In the article, you’ll understand how this virtual currency became more valuable in the last few years and how it makes transferring money online as easy as sending an email.

But you don’t even have to wait for your print magazine. If you click below, you can gain access to our article about bitcoins and other special e-books published by SUPER. You just have to open your digital wallet and spend a few thousandths of a bitcoin. You will also test the first journalistic paywall entirely based on bitcoins.

“Superinteressante magazine has been known in Brazil as an innovative publication, so it was important to us to experiment with a such a disruptive technology as bitcoins,” said Rafael Kenski, the magazine’s editor.

First published in 1987, Superinteressante (often referred to as just Super) is owned by the Brazilian publishing giant Editora Abril.

Kenski believes in the power of micropayments for publishing, something that Super is specifically testing with its option to pay for articles using bitcoin.

“The publishing industry has been testing several ways to monetize online content, and micropayment has always been one possibility. Due to large fees, bad user experience and other technical difficulties, it has not really worked so far. Bitcoin can solve some of these problems, so it was worth testing it,” he said

The publication is using the services of Mercado Bitcoin, an exchange and processor, to facilitate bitcoin payments. Rodrigo Batista, the CEO of Sao Paolo-based Mercado, says that Super is giving bitcoin a shot, just to see if it will be successful.

“They are giving bitcoin a chance, and feeling out how this goes,” said Batista.

Batista says that bitcoin is still quite small in Brazil, but Super and other media outlets are getting BTC into the national consciousness.

“It’s still a very small environment, but it’s getting some press coverage here,” he said.

And Batista is not overly concerned about the government of Brazil intervening in any way in regards to bitcoin regulation.

“They don’t even bother right now, they don’t care. [Mercado is] trading less than 2,000 BTC per month. We would probably just need to obey some minimum capital restrictions at some point, but that’s all.”

Kenski, the magazine editor, says that a history in Brazil of currency disruptions might make bitcoin palatable to the general public.

“Throughout the 1980s and 1990s, we suffered from hyperinflation and changed the national currency …read more